Husband surprises wife with £1,600 12ft T-Rex in place of gnome she asked for 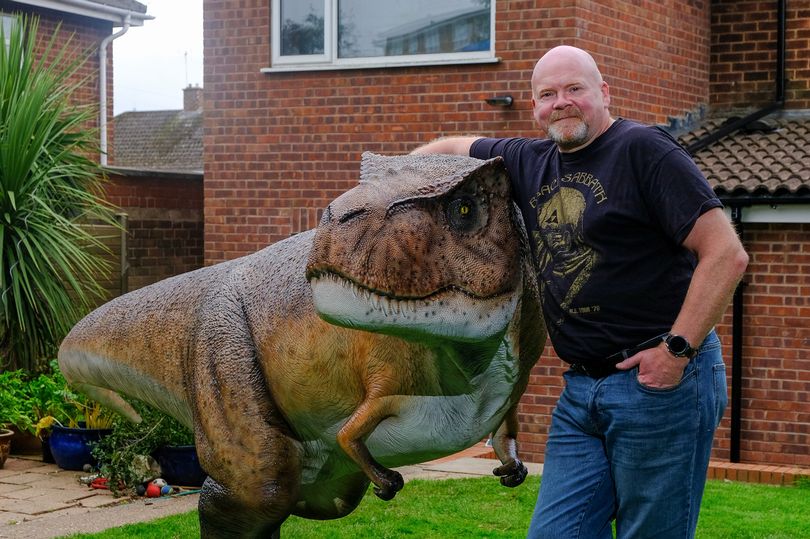 Adrian Shaw from Leamington Spa, Warks, gave his wife Deborah the fright of her life as she discovered the mighty beast in their garden in the middle of the night

A husband who was asked by his wife to spruce up their garden, decided to surprise her with a 12ft-tall T-Rex instead.

"She suggested I clear away the weeds and maybe put a gnome on the patio which got me thinking.

"I thought nothing could possibly look nicer in the garden than a 3.5 metre replica of a rampaging T-Rex, so I bought one.

"I guess that it is most people's dream to own a 3.5 metre replica of a rampaging T-Rex but they don't have the space or resources to do this.

"I have been very fortunate to be able to realise the dream."

He purchased the dinosaur for £1,600 from a company in Wales who said they could deliver it.

All he had to do then was hire a crane to lift it into the garden.

He added: "The neighbours loved it and took lots of pictures and I thought it looked great in the garden."

But wife Deborah, a school business manager, got the fright of her life when she spotted it in their garden in the middle of the night.

Adrian, who has been together with Deborah for 20 years and married for six, added: "I thought my wife would be thrilled to bits but I don't think she was as enthusiastic as I'd expected her to be.

"She loves the Jurassic Park films and watches all the David Attenborough documentaries, so I thought I couldn't go wrong with the purchase really.

"She came home late from work and it was dark so I thought I'd surprise her with Dave the next morning when she opened the curtains.

"I'd even set up my camera to capture her reaction, which I was expecting to be one of sheer delight."