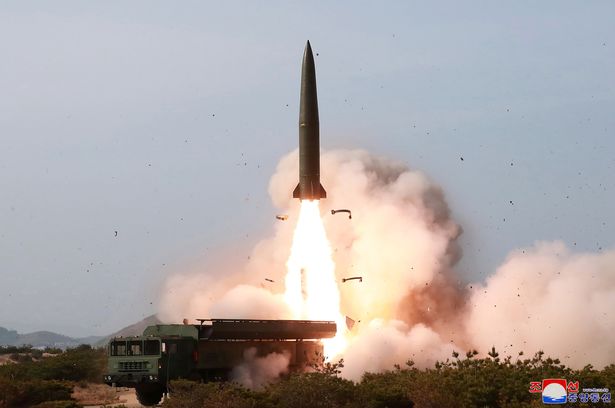 North Korea has fired two projectiles into the Sea of Japan in what appears to be its latest ballistic missile launch days after a warning to the US. Kim Jong-un oversaw the launch a day after sending a surprise condolence message to South Korean President Moon Jae-in over the passing of his mother. The suspected missiles were fired shortly after the funeral for Moon's mother was held on Thursday, flying for 230 miles at an altitude of 56 miles, according to Seoul's military. An air base used by Japan and the US issued a "real world missile alert" and told personnel to "seek shelter". Ships in the Sea of Japan were also warned. Japan's coastguard said the projectiles appeared to be ballistic missiles and they landed outside its territorial waters and exclusive economic zone to the east of North Korea. Japan's Misawa Air Base put out a “real world missile alert” and told troops to "seek shelter", according to a post on its Facebook page.

The "all clear" was given minutes later at around 5pm local time, the American military newspaper Stars and Stripes reported.

North Korea had recently warned the US it was losing patience over the stalled talks.

On October 3, Kim's regime announced that it had successfully test-fired a new submarine-launched ballistic missile from the sea.